Reinforced concrete gravity sewer D1500 mm, connecting the center of Kharkov with Dikanevskimi treatment plant was built by German prisoners of war after the liberation of the city.

For more than 70 years of life due to corrosion of the gas formed a series of failures that led to the emergency state collector.

In 2010, work began on the reconstruction of the disaster area of the collector.

Feature of the renovation work was the fact that the destroyed section of the reservoir located near the airport, right under the big road junction town of Kharkov: Merefa highway crossroads, Gagarin Avenue, and so the 50th anniversary of the USSR. In this case, shortly before the city services were held improvement works adjacent to the airport area.

Collection of existing factors precluded large-scale device trenches for laying a new pipeline and dictate the only solution – the use of the pipe rehabilitation spirit.
The plant produced a special pipe «Spiroplast» Spiro D1200 mm, with high ring stiffness, which was carried out emergency rehabilitation of the site. 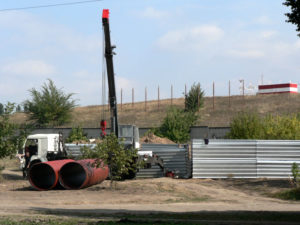 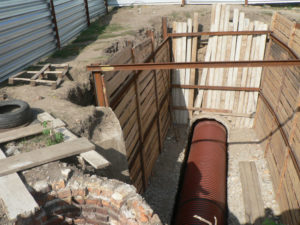 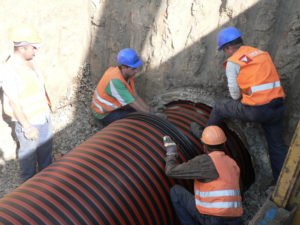