This sewage pipeline 9 km long was built in 60th of 20th century. For  more than a half century operating life of the pipeline all the pipe line became covered with faults caused by gas corrosion. That is why pipeline became off-grade.

Contractors have made rehabilitation of pipeline with SPIRO pipe 1200 mm diameter with compulsory fulfillment of tube space with compo.

This method gave an opportunity to get rid off excavation works and prolong operating life of pipe line for more 50 years. 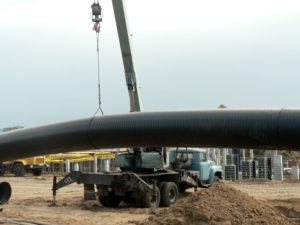