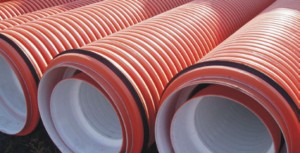 These systems can be used for construction of networks of external sewage, drainage, as well as a protective cover for laying electrical, telephone and cable television.

Corrugated pipe for gravity sewer outside GOFR-to made of polyethylene pipe grades. In the case of wastewater containing corrosive environments and high temperature environments, systems GOFR-K are made of polypropylene.

For the construction of non-pressure sewerage outside plant «Spiroplast» makes GOFR-pipe to a diameter of 110, 160 and 200 mm with ring stiffness SN4 and SN8. The pipes are made with bells, lengths of 6 m, or 12 m lengths complete with dvuhrastrubnoy clutch and two sealing rings. 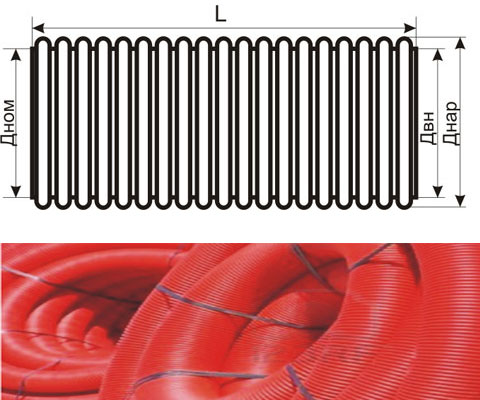 Corrugated pipe GOFR-E is an excellent protection against mechanical damage or electrical fire, television and telephone cables, voltage up to 10 kVolt. The pipe is made of HDPE outer diameter 110 and 160 mm, in lengths of 4 or 6 meters. Tubes with a diameter of 110 mm can be supplied in coils of 50 lm

Pipe GOFR-E is simple to install, easy and convenient to transport, which reduces the cost for transportation, in addition, it is an insulator, and does not require grounding.

Drainage corrugated pipes used in the creation of drainage systems to protect buildings or portion of the excess moisture, the seasonal rise of water table. Drainage is a complex system of interconnected tubes arranged around or along the perimeter of the water structures. The system comes running down to the ground water.

The pipe can be perforated on the walls, and fitted a filter geotextile.

Drainage Corrugated pipe GOFR-D is manufactured from HDPE outer diameter 110 and 160 mm, in lengths of 4 or 6 meters, complete with dvuhrastrubnoy clutch and two sealing rings.

GOFR-D – without perforations. Infiltrovanyh used to transport wastewater to the wells